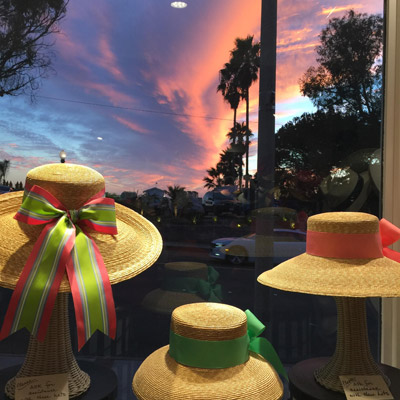 THE HAT BOX made its debut as a custom hat store in East Hampton, New York in 1992. Later a second store was opened in Sag Harbor, New York. Then in 2002, THE HAT BOX relocated to its present location in lovely Laguna Beach. The designer, milliner and owner, was and still is, Paula Del Percio.

For the past 25 years, Paula has created handmade, high-fashion hats for many Hollywood celebrities, famous authors, and sophisticated hat enthusiasts around the world. Her hats have been sold in fine specialty boutiques, department stores such as Bergdorf Goodman and Henri Bendel, and the Hampton Classic. In the Spring of 1997, Paula received a MILLI Award for the Best Daytime Hat, and one of her original designs was chosen by the Staten Island Design Museum for its permanent collection.

Paula was formally trained in millinery techniques at the Fashion Institute of Technology in New York City, but originally received her inspiration from watching her parents at work in their own millinery factory. She grew up around tools-of-the-trade… wooden hat blocks, feathers, felt, straw, flowers, beading, ribbons and more. Today, she still works on some of the same hat blocks that her father used to shape hats and also draws from an extensive collection of silk and taffeta ribbons which were used by her mother for trimming. Paula Del Percio finds a special connection to her creations as she follows in her parents’ footsteps.

Welcome to THE HAT BOX where you will find a unique collection of fine chapeau for women and men. From sun hats to hand made custom hats, you will experience a colorful display of hats for all occasions… the Kentucky Derby, Del Mar, weddings, garden parties and more. Enter a hat shop created by Paula for your delight, where our experience, quality and service will help guide your selection. We hope to see you soon!